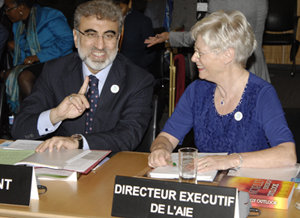 The International Energy Agency and six “partner countries” – Brazil, China, India, Indonesia, Russia and South Africa – on Wednesday for the first time expressed their mutual interest in pursuing a stronger, more enhanced form of multilateral co-operation. The Joint Declaration on Association was issued at the end of the 2013 IEA Ministerial Meeting.

Chaired by Turkish Minister of Energy and Natural Resources Taner Yildiz, the IEA Ministerial took place on 19-20 November in Paris, bringing together ministers and senior government officials from the 28 IEA member countries as well as Brazil, China, India, Indonesia, Mexico, Russia and South Africa. Also participating were ministers from the IEA accession nations of Chile and Estonia – the latter of which just cleared the last hurdle toward IEA membership – as well as more than 30 industry leaders from the IEA Energy Business Council, which is made up of top companies active in energy or closely related fields.

At the conclusion of the meeting, all 28 IEA member countries also issued a separate statement acknowledging the significant role that the energy sector can play in limiting climate change. In the IEA Member Countries’ Statement on Climate Change, the ministers backed four energy policies proposed by the IEA that would keep climate goals alive without harming economic growth.

Under the theme, “Global Synergy for Tomorrow’s Energy,” the two-day conference took place as the IEA prepares to celebrate its 40th anniversary. With the global energy landscape markedly different than at the time of the agency’s founding in 1974, participants exchanged views on heightened co-operation among IEA members, emerging economies and the business community to tackle the related challenges of energy security, sustainability and economic prosperity.

“In the 40th anniversary of IEA’s founding, ministers’ discussions were centred around the policy strategies needed to cope with the challenges presented by the shifting energy landscape and geopolitics that have direct impact on the global energy markets,” Minister Yildiz said in the IEA Ministerial Chair’s Summary, issued at the conclusion of the meeting. “Increases in global energy demand, new areas of production, shifts in supply and demand centres on the energy map, energy security and diversification, focus on energy efficiency, linkages between energy, sustainable development and inclusive growth, especially in the face of rising demand also as a result of global economic recovery shaped the discussions of ministers together with partners.”